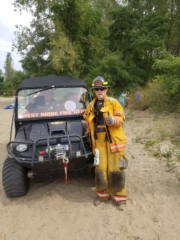 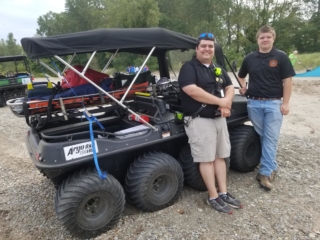 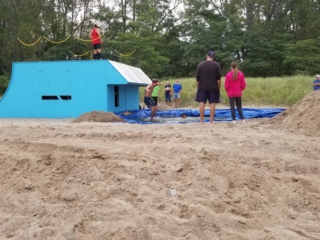 On September 7th the West Ridge Fire Department once again assisted the Barber National Institute at its yearly "Beast-On-The-Bay" event.  As described on the Beast Web Site

"The seventh annual Barber Beast on the Bay is set for Saturday, September 7, 2019, at Presque Isle State Park (USA Today’s ‘Best Pennsylvania Attraction’) in Erie, PA. Participants will take on 10 miles of sand, water, and trails – it’s the nature of the Beast! Be ready to run, jump, climb and crawl across more than 30 obstacles on the shores of Lake Erie.

While you tackle your challenges during the Beast, you’ll also be helping the children and adults with autism, intellectual disabilities and behavioral health challenges at the Barber National Institute who take on their own obstacles on a daily basis, as the event supports the non-profit and its 6,100 individuals"...

Again this year we had fellow Firefighter John Paul Moroney of the Greensburg PA Fire Department run in this grueling event.  John has been a very visible athlete at this event for several years and he is a crowd favorite and a true inspiration to the other runners on this course.  Thanks Firefighter Moroney and thanks to the Greensburg Fire Department for such a wonderful representative from your department, and for representing all Firefighters so admirably !